This is for encouragement, ideas, and support for people going through a faith transition no matter where you hope to end up. This is also the place to laugh, cry, and love together.
Post Reply
14 posts • Page 1 of 1

Nothing major, just a little story I thought is interesting. Sorry, turned out be a much longer post than anticipated.

My friend, who is also the EQP, reached out to me yesterday to ask if I could cook/smoke some pork butt for pulled pork sammiches. Our ward has an annual Rodeo instead of a picnic, baseball game, etc. Yes, we live in Hicktown cowboy country in North Phoenix.

So I tell him "Sure, Happy to help". He buys the pork last night and brings it by my house around 8:30 pm. We end up talking for about an hour or so.

Several things about our conversation and the upcoming events I thought were interesting.

Since I've been out as long as I have, I've kinda forgot about Mormon Standard Time. Basically, people call you up last minute and expect you to commit to a major event with minimal notice. Part of this, I blame on typical male unawareness. If the RS was in charge, they probably would have everything ready to go months in advance. But since the EQ is running this show, it's a last-minute fire drill. So he asks me yesterday afternoon if I can help. It takes 12-14 hours to properly smoke a pork butt. To have the meat ready by lunchtime on Saturday, I gotta start cooking at 6:00pm Friday. And I have work, etc. So he's gotta bring me the meat on Thursday night. To his credit, he did. But I was just scratching my head at how crazy it seemed to wait until last minute to plan a major element of the food preparation.

He show's up last night and we talk for a bit while unloaded vast quantities of meat. I have a pellet smoker, so it's relatively easy for me to cook it. It's not a major inconvenience. He has 15 pork butts, each about 8-10 lbs. I can fit 9 of them in my smoker. He said he was starting to panic a bit yesterday afternoon when he realized how much he needed to cook. He was planning on cooking 15 pork butts, one at a time, in his InstantPot. Each one takes about 1.5 hours. Then he realized it would take 24 hours of non-stop InstantPot action every 90 minutes to cook it all. At that point, he realized he needed help. Again, I was baffled at standard Mormon operating procedures to take on such a burden and not better plan things out.

We talked a little bit about his brother that recently passed away. Sad story. A longtime alcoholic that finally caught up with him, then the craziness that ensued - it was a BatShiz crazy series of events and DRAMA DRAMA DRAMA! It made me remember how people get so caught in being a TBM. His brother had major problems and the family drama was extreme. If you stay in church and be a good little TBM, life is easier. It really is. Being an adult and making your own decisions is much harder.

We haven't been to church for about 2 years, but I know a new Bishop was installed a few months ago. I asked how the new Bishop was doing. That sparked a discussion about the miracle how some GA70 showed up to call a new Stake Presidency and was inspired to say "That's our new SP!" from a list of names. Standard Mormon Miracles. Then, my friend explains his new responsibilities as EQP. He's in charge of EQ, HP, Ward Mission Leader, Rodeo Planning Chairman, and Ministering Supervisor. It's just plain nuts how much these inspired changes have loaded up his plate. He thinks it's divine leadership. I call it running out of laborers.

Next, this ward rodeo is Saturday. It really is kinda cool. Greased pig chase. Chicken Chase. Tug O war. 3-Legged Race. Potato Sack hop. All good stuff. My brother and his family are visiting us this weekend, they live in Southern AZ. He's total ExMo and wife is NeverMo. His kids don't do a lot of outdoor stuff. Even though the rodeo is "church" sponsored, it would still be an awesome and free activity for all the kids. And it gets them out of the house, specifically my house.

Sooooo, this vitriolic ExMo is taking his family and his ExMo Brothers family to his the LDS ward Rodeo.

This morning, I called my Dad (TBM in Salt Lake City) to check in with him. He recently had an injury and I wanted to see how he is doing. I told him about the cooking pork butts story and my brother coming to visit and that I'm taking everyone to the rodeo. He thinks this sounds like the best idea he's ever heard. So now he's scrambling to catch a flight from SLC to PHX tonight so he can see all this pork I'm cooking and come see half of his grandkids at this Ward rodeo.

Lastly, the main reason my Brother is coming this weekend is so I can help him repair something on his car. It should be an easy fix, but he's concerned it will be a several hour job. I told my dad about it. So on top of coming to see this rodeo fiasco, my dad is coming to make a bet. If my brother and I fix the car in less than 1 hour, my dad buys everyone dinner. If it takes more than 1 hour, I owe my dad a $40 gift card to Lonestar Steak house.

Also, my brother and I plan to drink lots of beer this weekend.

Soooooooo. Fun times await. I shall return and report.
Top

Great post, but hilariously, you lost me right after the arrangement of certain words in your post. Those words are: "pork butt" and "I have a pellet smoker". I may need to hit a barbecue place for lunch.

I humbly suggest to your EQP friend that he embrace the idea of delegation. He should think of this calling, and of himself, as a bishop in miniature. All of those ridiculous responsibilies on his head should be liberally shared with other people in the quorum. He's the quorum godfather and he actually has the power to make them an offer they can't refuse.

Good luck with the confluence of you father, slow roasted pork, ward rodeo, and beer.
Top

The trick with working on the car is to wait to start drinking the beer until after you finish with the work. Otherwise it WILL take more than an hour.
"The story so far: In the beginning the Universe was created. This has made a lot of people very angry and been widely regarded as a bad move." -- Douglas Adams
Top

Hell, I might fly down to Phoenix to see this...
“For me, it is far better to grasp the Universe as it really is than to persist in delusion, however satisfying and reassuring.”

(Dear Zeus, my family is boring.

)
Faith does not give you the answers, it just stops you asking the questions. -Frater Ravus

The last person I recall talking about pulled pork butt on the message forums was Dr. David Bokavoy. Three cheers to barbecue, especially Korean barbecue.
Good faith does not require evidence, but it also does not turn a blind eye to that evidence. Otherwise, it becomes misplaced faith.
-- Moksha
Top

This forum post is making me hungry!
https://en.m.wikipedia.org/wiki/Walter_ ... clergyman)
Top

Wow. A rodeo. I would even attend something like that. The ward events around here are so boring and the food is always so bad.

It must be nice to help this guy out without the added pressure of your own calling. Nothing like the pressure/guilt that comes with so many added responsibilities to your plate. I feel for the poor guy, just losing his brother and having all this heaped upon him. Yes he could have planned better. Good luck delegating. It seems like the masses usually have "Little Red Hen" syndrome. "Too busy" to help with the work, but happy to go to the event and eat. I see this with my dad. He's over 90 and gets swamped because he believes in service (though he is learning to say no out of necessity). My dad calls around for help with various tasks and gets mostly excuses. I see the frustration it causes him. I think of my life before and after active membership. I am not less of a giver nor more of a taker, but I get to choose, guilt free.

Your story is fun and sad. I wish I could be there. I want to catch a greased pig.
Top

I suggest trying to figure out ways to do favors for people that don't run the risk of costing you $40!

Have fun!
“The easy confidence with which I know another man's religion is folly teaches me to suspect that my own is also.” -Mark Twain

For all of you wishing to watch the madness, I assure you that reality is much less entertaining than the imagination.

The meat smoking was pretty cool, and there was much rejoicing.

Brother and I had some drinks, all the adults were exhausted and went to bed early.

Rodeo was fun. It probably deserves it's own little write-up, but for now it was standard Mormon ambience. We didn't stay for the whole thing, just lunch and chasing a few chickens and snow cones - about 2.5 hours. Everyone got a mild sunburn.

Throw in a little motorcyles, ATV's and sushi roll and you have yourself a weekend! 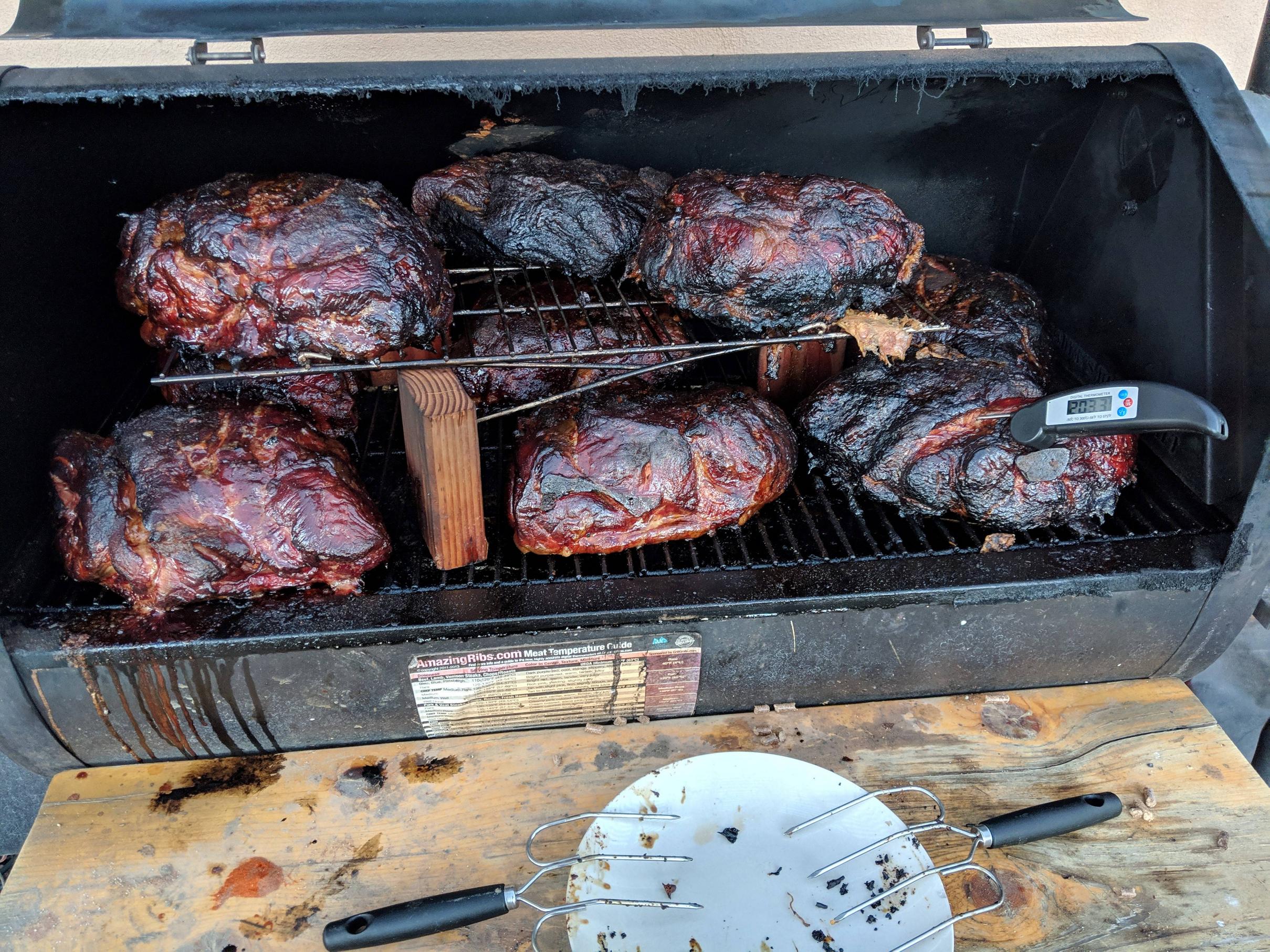 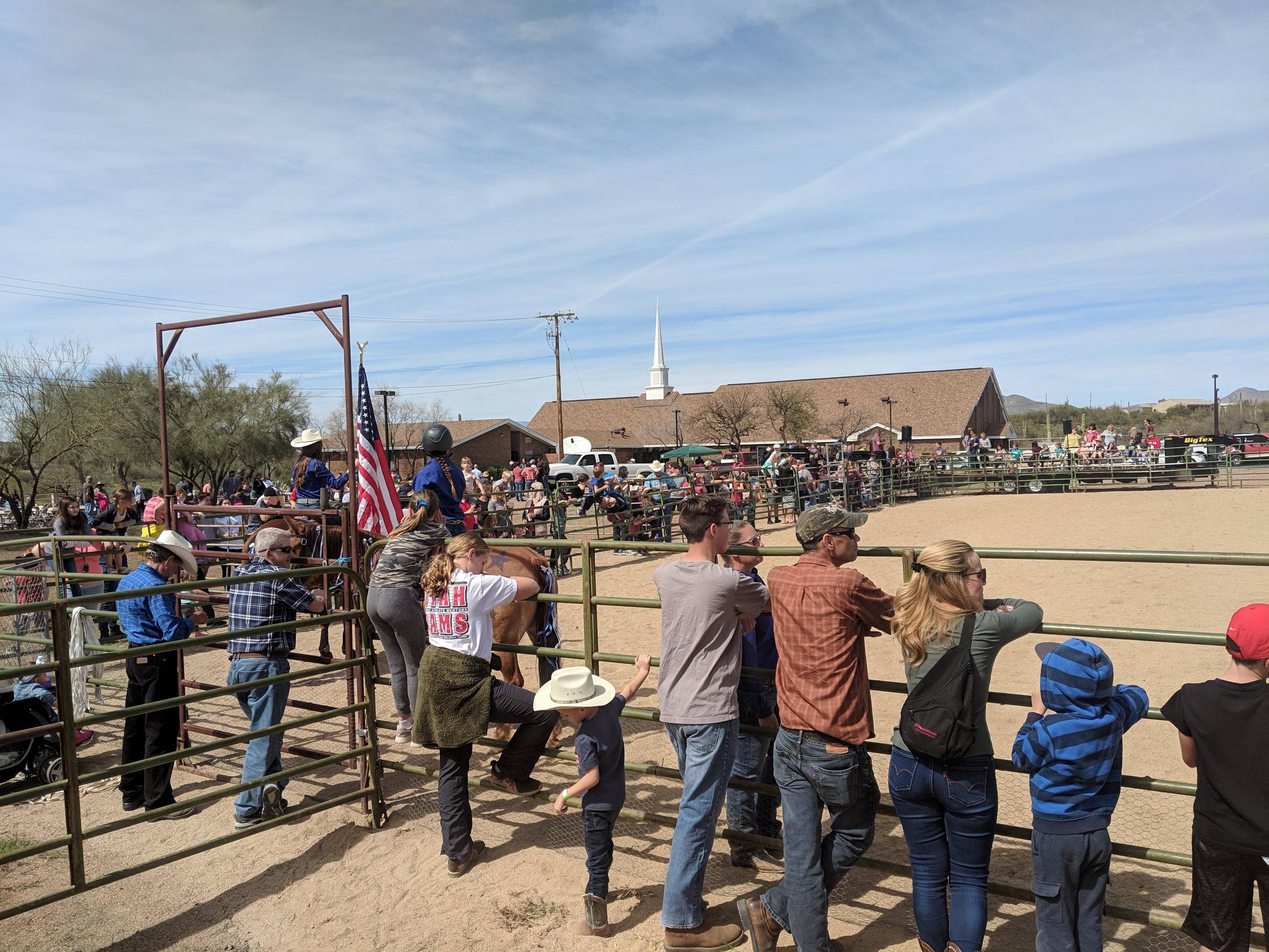 Wait a minute, is this perhaps a traeger and you didn't even announce the manufacturer? Lol, a buddy I work with smokes ribs or briskets once a week but always has to remind us it's a traeger. Kind of funny.

What a good guy though to cook pork butts and help a brother with his vehicle. I would have done the vehicle part but not cooking for the ward. I commend you for that. Btw, those look damn tasty.
Top

Yay! [claps] I was hoping for this.

Sad your dad couldn't make it.

At a rodeo a long time ago, my son caught a duck. It was so traumatized by having a bunch of kids chasing it (and ripping of the thing [toe? I don't know what it's called] above its foot) that it spent the remainder of the rodeo cowering on my lap trying to put its head in my shirt (after owning it for a while, it was taken down to southern AZ to live in a duck pond (with the permission of the local gov't entity that had created it). Last I heard, it was very happy, and had found a mate).
There are 2 Gods. One who created us. The other you created. The God you made up is just like you-thrives on flattery-makes you live in fear.

SLK - I don't have a traeger, but it's the same thing Ford vs Chevy.

Traeger does have name recognition. So does Kleenex
Top

I didn’t catch if the beer drinking was at the rodeo or at home. I’ve never been to a beer-free rodeo.
The pork butt looks delicious.
~2bizE
Top
Post Reply
14 posts • Page 1 of 1

Users browsing this forum: No registered users and 28 guests