This is for encouragement, ideas, and support for people going through a faith transition no matter where you hope to end up. This is also the place to laugh, cry, and love together.
Post Reply
5 posts • Page 1 of 1

https://www.msn.com/en-us/news/us/mormo ... 1ff8472c8c
"There is but one straight course, and that is to seek truth and pursue it steadily."

I saw some of the on line stink over this. Just what gave the church the idea that it can alter someone else’s work and put it out as it’s own? Oh, yeah, there has also been some recent stink about GAs giving talks in which they take someone else’s sermon and use the ideas without giving any credit to the original author of that sermon. Bednar the plagiarist. And in the past, there have been people writing about how the Ensign took pictures of women doing a service project, and then put a t-shirt under the sun dress of a nursing mother. It was not an immodest sundress to begin with, but apparently did not meet the standards of the Ensign. This is from an old Wheat and Tares article from a member in Australia whose mother was also in the picture so he knew the young mother. So, the church feels it can body shame nursing mothers who are giving service to others, instead f honoring them for being out helping others on a very hot day. Do the dirty minded men at the church’s top layer know what it is like to be breast feeding in a very hot climate where you have to practically undress to feed your baby? No, they just have this sick fetish for boobs.

This thing about stealing someone else’s work and then using it, altering it, pretending it came as inspiration from God of course started with Joseph Smith. He just borrowed ideas from where ever he found them and used them for his own purposes.

They did the same with the nasty angel shoulders in Carl Bloch's painting of the resurrection: 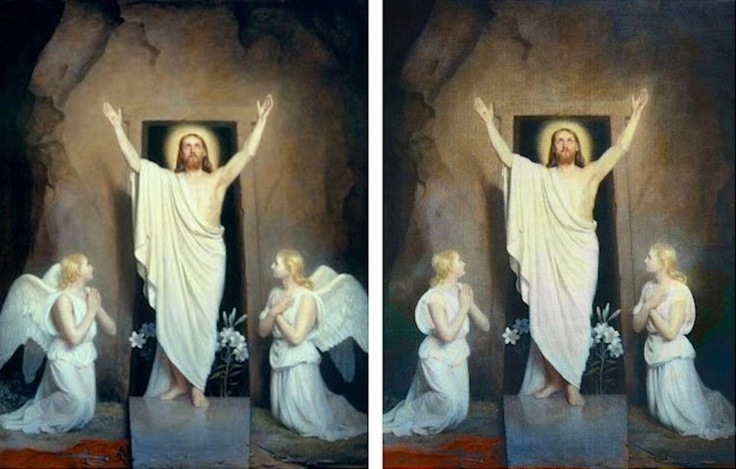 And clipped their wings while they were at it. Bloch is not allowed to have his own idea of what angels look like.

Does anyone remember the painting of Esther (I think, or maybe Ruth?) in the Salt Lake temple with a partially visible nipple? They removed it long ago, but it was there when I first went. Too bad, it was a beautiful painting.
“The easy confidence with which I know another man's religion is folly teaches me to suspect that my own is also.” -Mark Twain

The term for mutilating classic artwork is Mormonizing.
Good faith does not require evidence, but it also does not turn a blind eye to that evidence. Otherwise, it becomes misplaced faith.
-- Moksha
Top
Post Reply
5 posts • Page 1 of 1

Users browsing this forum: No registered users and 21 guests