A place to love and accept the people who think about and live Mormonism on their own terms.
https://newordermormon.net/

by RubinHighlander
How about a game of "Hide the Salami" in the scriptures?

God sitting upon his throne?

The original erect penis was removed in past editions of the Pearl of Great Price, and put back in the 1981 Triple Combo.

by moksha
Getting Adamites to the Old World

One of the postulates of LDS apologetics is that Adam and Eve lived outside Independence, Missouri. When asked how they got to the Old World for their descendant's biblical adventures, apologists point to the time when there was the super-continent of Pangea.

One problem with that is this was before the age of mammals. How do we get around that? The answer is with attenuated LDS apologetics. Consider this: There were proto-mammals called the Synapsids. They weren't quite mammals, but they were getting there and after the great Permian extinction event, the small surviving ancestors took the great leap of faith and Darwinism enabling them to make it past the Age of the Dinosaurs and righteously enduring until they could begin the Dispensation of Mammals.

So how does this relate to attenuated LDS apologetics and getting the descendants of Adam and Eve to another continent? Easy, for Adam and Eve were both Synapsids.

And now you have evidence of the rest of the story.

Synapsid - both first Adamite and proto-tapir

by moksha
More History of BYU - The Wilkinson Years

The history of the Brigham Young University can be very instructive. When you see how they got from point A to point B, it is helpful in calculating the trajectory of when they will go over the edge at 3.10 centimeters per hours.

Back in the year 1971, there was a bit of controversy on the BYU Campus when President Ernest L. Wilkinson was apprised about a book in the J. Reuben Clark, Jr. Library titled Yertle the Turtle by Dr. Seuss.

Professors in the BYU Department of Religion had alerted President Wilkinson to a particular quote in the book:

I know up on top you are seeing great sights, but down here on the bottom, we too should have rights.

The professors in the religion department were concerned that such a quote could undermine the authority of the Brethren. Dr. Wilkinson concurred but felt he should run such a matter by President Joseph Fielding Smith. Upon hearing the quote, President Smith was livid and immediately ordered that the book Yertle the Turtle be removed from the library and forever be banned from BYU. President Wilkinson swiftly made those changes.

Later on, in 1974, the name of the library was changed to the Harold B. Lee Library and the matter was forgotten. Finally, the rest of the story can be told once again.

by moksha
They lived longer back then 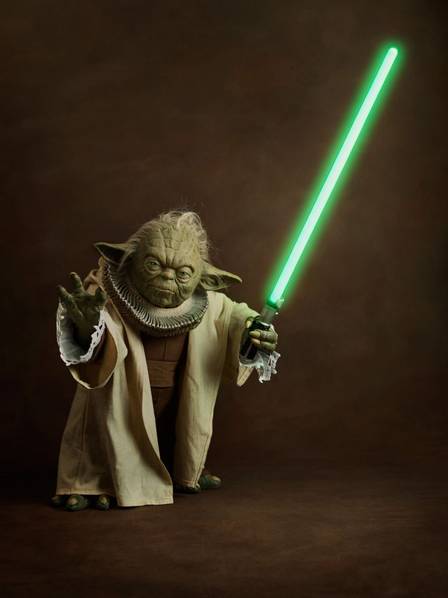 You will note by the 16th Century collar that President Spencer W. Kimball
was far older than previously thought.

Might wanna leave that theory in the oven a few more minutes.
1) Pretty sure there were mammals 6000 years ago.
2) Adam and Eve were created after the mammals.

by moksha
For most Utah bakeries, you are limited in the number of bride statuettes by the surface area on top of the wedding cake.

by moksha
LDS save Rainforest Sloths

The rainforest is dwindling. Can anything be done to save its creatures?

The LDS Church has heard the call and is now responding. LDS missionaries have been sent forth to provide exaltation for those willing to join the Church.

Happiness can be yours for only 10% of your gross leaves. Pray about it. 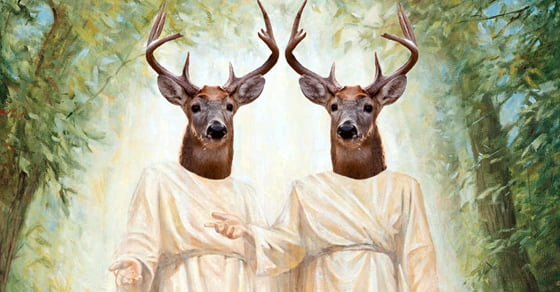 Joseph, my son, we have a work for you to do after we finish prancing in the woods .....


Courtesy of Exiled from Mormon Discussions

by moksha
The exact incantation for LDS Necromancing

In brightest day, in blackest night,
Resting spirits shall serve me right,
Rise from graves, be in my sight
Heed my power... Melchizedek Priesthood might!

Hope this is not giving away too much advanced Temple ceremony stuff.

by moksha
Bras in Pioneer History

Utah pioneer women were first introduced to wearing bras, when they were forced into a corral and then cut from the herd by means of Elders wielding silver crosses and braids of garlic into individual bra stands. The bras were hooked into place by fellow Relief Society inmates. These women were subsequently covered with garments and other clothing then released into their husband's custody.

Now you know the rest of the story.

by moksha
Family Shunning for Disbelief

Thank goodness the LDS Ceremony of Discommendation is becoming less frequent. It was regrettable when disaffected family members were forced to run the gauntlet and jabbed repeatedly with pain sticks by TBM family members. Sometimes the pain was so intense that the disaffected were forced to scream out, "I believe, I believe. Just don't hurt me no more, please!" The fallen member was then taken to LDS Hospital for a blessing and released into the custody of the ward.

Senator Mike Lee (M-Utah) wanted to acquaint his fellow Senators with some of the stories found in the Book of Mormon. Here he presents a painting showing Ronald Reagan shooting a machine gun while the Utah Velociraptor he is riding carries the American flag. The painting was from one of those Book of Mormon stories in the original 116 pages which unfortunately was lost.

by moksha
Preach My Gospel

In case you teach in the nursery, you can still include the lesson on the Book of Mormon translation with a song:

Repeat this through Mommy and Daddy hats, then positively reinforce the lesson with a snack. The toddlers will be glowing with the gospel.

by Corsair
There is a cartoonist on Reddit who has been creating some "Rick and Morty" crossovers with Mormonism: 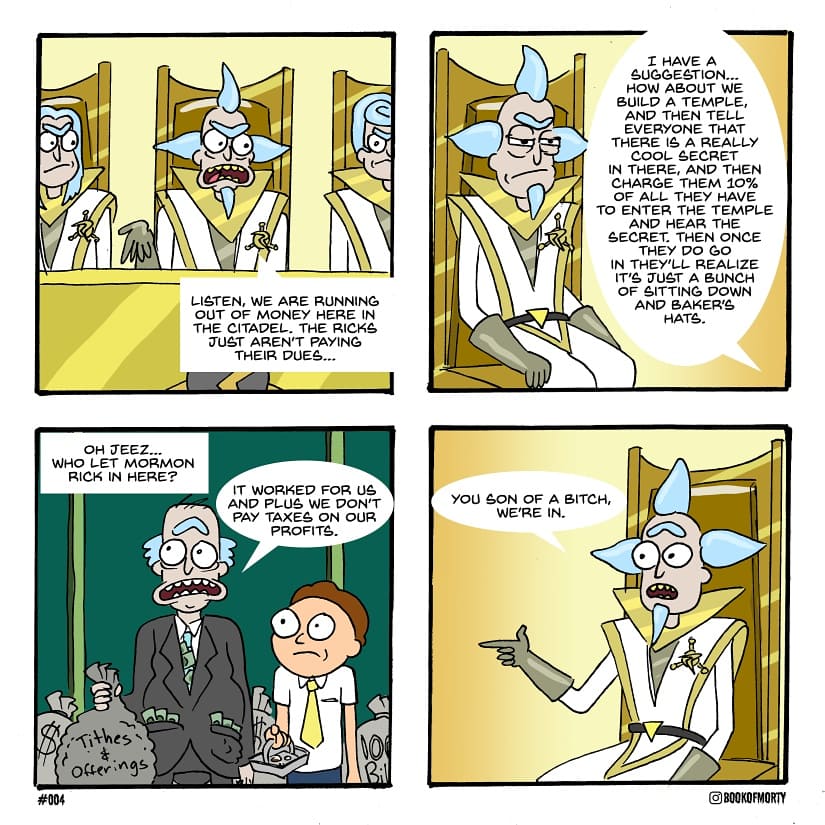 His username is BookOfMorty and he has a few others. I mean, who wouldn't want Mormon Rick as their bishop?

PROVO - The Royal Lipizzaner Tapir Team has signed a multiyear contract with Busch Gardens thanks to their association with Dr. Daniel C. Peterson. The Tapir Team might even be pulling the Orem City float during the Daze of '47 Parade in July.

Hagoth wrote: ↑
Sun Apr 19, 2020 7:52 am
Pinocchio couldn't be a real boy until he got the Aaronic priesthood so he could pass a tray of bread with God's sanction.

This could be a perennial Church favorite if they can secure production rights from Disney Studios. Gepetto sounds a bit too ethnic for Utah, so perhaps the woodcarver's name will be changed to Eric. Being Mormon, Eric will be married to Emily and they will already have seven children before Pinocchio is assembled at Eric's engineering design company in American Fork.

Once Aaronicized, Pinocchio's circuits will be closer to God than Emily.
All times are UTC-07:00
Page 5 of 5
Powered by phpBB® Forum Software © phpBB Limited
https://www.phpbb.com/